How To Successfully Navigate Thanksgiving Day 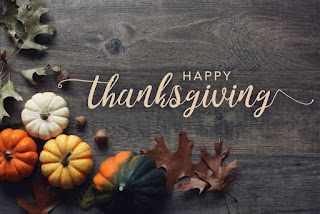 1. Exercise 1st Thing in The Morning Thanksgiving Day
There are all kinds of 5k Turkey Trots going on which is a fun and festive way to start your day with a really good calorie burn. Does this mean you get to eat extra because you worked out? Not really. It means your workout will help you to burn off the extra calories you are bound to consume!

2. Don’t Starve Yourself All Day
Most people think if they don’t eat they will be able to eat all they want at the Thanksgiving dinner table. The reality is, you have now put your body into starvation mode. The minute you finally do eat, #1 you are going to be so ravenous that you eat all that is in sight, and #2, your body is going to take everything you eat, healthy or not so healthy, and store it for reserves since you put your body into starvation mode. Your best bet is to still eat small meals throughout the day. Ex: 1 Egg or 2 egg-white omelet with veggies and a ½ cup berries for breakfast,  a nice chicken salad for lunch and some deli turkey and crackers for a snack to keep you going before dinner. Then, even after all that eating, you still eat dinner! This will keep your  metabolism revving all day making it much easier burning off the excess calories.

3. Eat Everything But in Small Portions
Don’t go eat-crazy as if you’ll never see this food again. The reality is, you most likely will have mini Thanksgiving feasts for days with leftovers. So go light, try everything, and try really hard NOT to stuff yourself! This is key! The minute you stuff yourself, whatever your body cannot use for muscle repair and energy, will be stored as fat. So make a decision to not overeat.

4. Take a Walk After Dinner or a Bike Ride
Something active will help in the digestion process and it will also add to your calorie burn vs. the alternative go-to of lounging on the couch in front of the football game as the tryptophan sinks in and your body goes into hibernation for the remainder of the day.

5. Don’t Take Too Many Leftovers
Do you really need to be eating this kind of food every day, for every meal for the next week? Let me help as you try to justify that answer. The answer is NO. Resist the mashup of potatoes, turkey, gravy, stuffing, corn, and everything else you can cram into that double-duty  zip lock. Just take one more meal’s worth. Trust that your meal will taste that much better.

6. Workout Hard The Next Day
The next morning, hit the gym, the outdoors or your home to get another really good calorie burn in.

7. Get Right Back on Track the NEXT Meal
Come breakfast the next day, get  back on top of things! They healthier you eat, the better you will feel post Thanksgiving.
You don’t have to deprive yourself when trying to lose weight, just do, think, eat and move smarter! Stuffing yourself with food is never the answer. Eating small portions is!
Posted by Fitness with a View at 5:47 PM No comments: 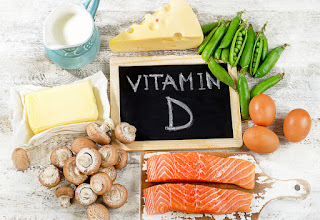 1. Salmon
Salmon is a popular fatty fish and a great source of vitamin D.
According to the USDA Food Composition Database, one 3.5-ounce (100-gram) serving of salmon contains between 361 and 685 IU of vitamin D.
However, it’s usually not specified whether the salmon was wild or farmed. This may not seem important, but it can make a big difference.
On average, wild-caught salmon packs 988 IU of vitamin D per 3.5-ounce (100-gram) serving, or 165% of the RDI. Some studies have found even higher levels in wild salmon — up to 1,300 IU per serving.
However, farmed salmon contains only 25% of that amount. Still, a serving of farmed salmon provides about 250 IU of vitamin D, or 42% of the RDI.

2. Herring and Sardines
Herring is a fish eaten around the world. It can be served raw, canned, smoked or pickled.
This small fish is also one of the best sources of vitamin D.
Fresh Atlantic herring provides 1,628 IU per 3.5-ounce (100-gram) serving, which is nearly three times the RDI.
If fresh fish isn't your thing, pickled herring is also a great source of vitamin D, providing 680 IU per 3.5-ounce (100-gram) serving, or 113% of the RDI.
However, pickled herring also contains a high amount of sodium,  which some people consume too much of.
Sardines are a good source of vitamin D as well — one serving contains 272 IU, or 45% of the RDI.
Other types of fatty fish are also good vitamin D sources. Halibut and mackerel provide 600 and 360 IU per serving, respectively.

3. Cod Liver Oil
Cod liver oil is a popular supplement. If you don't like fish, taking cod liver oil can be key to obtaining certain nutrients unavailable in other sources.
It’s an excellent source of vitamin D — at about 450 IU per teaspoon (4.9 ml), it clocks in at a massive 75% of the RDI. It's been used for many years to prevent and treat deficiency in children.
Cod liver oil is also a fantastic source of vitamin A, with 90% of the RDI in just one teaspoon (4.9 ml). However, vitamin A can be toxic in high amounts.
Therefore, be cautious with cod liver oil, making sure to not take too much.
In addition, cod liver oil is high in omega-3 fatty acids, in which many people are deficient.

4. Canned Tuna
Many people enjoy canned tuna because of its flavor and easy storage methods.
It’s also usually cheaper than buying fresh fish.
Canned light tuna packs up to 236 IU of vitamin D in a 3.5-ounce (100-gram) serving, which is nearly half of the RDI.
It’s also a good source of niacin and vitamin K.
Unfortunately, canned tuna contains methylmercury, a toxin found in many types of fish. If it builds up in your body, it can cause serious health problems.
However, some types of fish pose less risk than others. For instance, light tuna is typically a better choice than white tuna — it's considered safe to eat up to 6 ounces (170 grams) per week.

5. Oysters
Oysters are a type of clam that lives in saltwater. They’re delicious, low in calories and full of nutrients.
One 3.5-ounce (100-gram) serving of wild oysters has only 68 calories but contains 320 IU of vitamin D — over half the RDI.
In addition, one serving packs 2–6 times the RDI for vitamin B12, copper and zinc — far more than multivitamins.

6. Shrimp
Shrimp is a popular type of shellfish.
Yet unlike most other seafood sources of vitamin D, shrimp are very low in fat.
However, they still contain a good amount of vitamin D — 152 IU per serving, or 25% of the RDI.
They also contain beneficial omega-3 fatty acids, although at lower amounts than many other foods rich in vitamin D.
Shrimp also pack about 152 mg of cholesterol per serving, which is a significant amount.  Yet, this should not be a cause for concern.
No strong evidence supports the idea that dietary cholesterol intake increases heart disease risk.
Even the US Department of Health and Human Services has removed its upper limit for cholesterol intake, stating that overconsumption of cholesterol is not an issue.

7. Egg Yolks
People who don't eat fish should know that seafood is not the only source of vitamin D. Whole eggs are another good source, as well as a wonderfully nutritious food.
While most of the protein in an egg is found in the white, the fat, vitamins and minerals are found mostly in the yolk.
One typical egg yolk from chickens raised indoors contains 18–39 IU of vitamin D, which isn't very high.
However, pasture-raised chickens that roam outside in the sunlight produce eggs with levels 3–4 times higher.
Additionally, eggs from chickens given vitamin D-enriched feed have up to 6,000 IU of vitamin D per yolk. That’s a whopping 10 times the RDI.
Choosing eggs either from chickens raised outside or marketed as high in vitamin D can be a great way to meet your daily requirements.

Posted by Fitness with a View at 6:24 PM No comments:

Vitamin D To Help Fight Colds and The Winter Blues 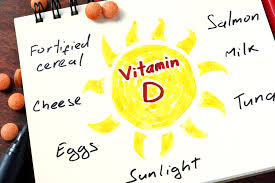 Vitamin D plays a major role in disease prevention and maintaining optimal health.  It has long been known to be important for bone health, but it serves many other functions. Vitamin D has been linked to the prevention of cancer, immunity to the cold, and the reduction of depression.  It supports cardiovascular health and proper immune function, making you much less likely to get the flu when you have optimal levels!

Your body can make its own vitamin D when you expose your skin to sunlight.  The UVB rays react with your skin and produce vitamin D3, which is sent to your liver and converted to calcidiol, also known as 25(OH)D.  Generally, 20-30 minutes of mid day sun exposure is sufficient for light skinned people, if you have darker skin you may need to double the time.  Interestingly, once your body has produced enough vitamin D through sun exposure, those same UVB rays will begin to prevent excess vitamin D production.  This means there’s no need to worry about getting too much vitamin D from sunlight.

This is a great natural system, however, if you live the US (or other northern latitudes) it’s very difficult and likely impossible to meet your Vitamin D needs from sunlight during the winter months.

During this time just about everyone in the US is in need of vitamin D supplementation.  One caveat with taking vitamin D orally is that it is possible to take too much.  However, this is unlikely as you would have to take large amounts very frequently.  As an oral supplement vitamin D3 is preferred over D2 as researchers have found that vitamin D3 is twice as effective as vitamin D2 in raising levels in the body.  Recent research indicates that taking 4000 IU  - 8000 IU per day will put you at an optimal level.  When you take vitamin D orally it is sent to your liver where it is converted to calcidiol, or 25(OH)D, the same as when your body creates it from sunlight. Since vitamin D is fat soluble it’s beneficial to take your vitamin D supplement with a healthy fat for better absorption.  The only way to know for sure the proper supplementation amount for you is to get a blood test for 25(OH)D before you begin supplementing and check it after 6-8 weeks.  An optimal level for 25(OH)D is 50-60 ng/mL.

In addition to playing a part in your emotional health maintaining optimal Vitamin D levels will support and enhance your athletic performance.  Studies have shown that athletes with optimal serum vitamin D concentrations bounced back better after intense exercise.  As athletes, we know that being able to get out there and feel good in our training also plays a part in our sense of well being!
Posted by Fitness with a View at 5:48 PM No comments: