Yawning While Exercising? Here is Why 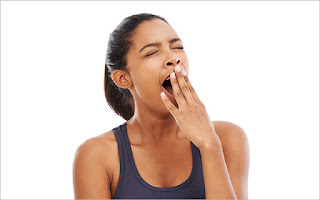 A yawn, which is usually associated with being tired or bored, is an innate reflex by the central nervous system — namely, the brain. That means you can't control when and where you yawn.  So just because you yawn a couple of times during a workout, it doesn't mean you should try to make it stop.

But here's why you might find yourself yawning during a workout.

1. You're Stressed or Anxious

The idea that yawning increases the amount of oxygen you take in — you're gulping a big breath of air, right? — has been debunked, according to a November 1987 study published in Behavioral and Neural Biology.  A yawn can, however, increase blood flow to the brain, which can improve focus and concentration.

Perhaps you're about to start a workout or a big athletic event, or you're a few minutes into it, you might start yawning as a way to improve your focus and concentration. That's because yawning can cool your brain temperature.

Before a workout, game or event, you might have anxiety and stress — but the good kind of stress — and that might elicit a yawn.  Your body's fight-or-flight response kicks in, and a yawn opens the jaw, which increases blood flow for the working muscles. A runner, for example, might yawn in the moments leading up to a race due to anxiety. That yawning should stop once she or he is moving because running is a steady-state exercise. When you're in a steady-state of aerobic exercise your brain knows you need to breathe consistently. A yawn disrupts that consistent breathing. In other words, your body prioritizes breathing over increasing blood flow or cooling down your body temperature — another reason you might be yawning during a workout.

Perhaps the biggest reason you might yawn during a workout is to bring your core body temperature down. This is called thermoregulation.

When you inhale a large amount of ambient air that's cooler than your body temperature, it helps lower your core temperature and brain temperature.

This happens because when you yawn, your jaw musculature contracts, increasing blood flow to those muscles. When you gulp in cool air, it cools the blood in the jaw muscles, which is then delivered to the brain and other parts of the body. This is a type of insensible perspiration — perspiration that does not involve a loss of pure water or associated loss of solute.

A major way we cool is by breathing.

Case in point: Researchers in a May 2014 study in Physiology & Behavior recruited 120 pedestrians to walk during the winter (December to March) and summer (June to October) and found that the participants who walked in the summer reported more yawning than those in the winter. This study supports evidence that yawning is used as a means of thermoregulation.

But when the ambient temperature is hotter than your core temperature, yawning will subside, according to a January 2013 review published in the International Journal of Applied and Basic Medical Research.

Whether you yawn during a workout depends on what you're actually doing. The exercises that most commonly cause yawning include high-intensity interval training (during the rest interval) and those that target large muscle groups, like heavy lifting for the lower body. You're using more musculature, which increases the core temperature. When you yawn during a HIIT workout, it will be during the rest or lighter interval.

If you really feel that you must reduce your yawn frequency, you can try methods to better thermoregulate. Methods that have worked are drinking cold water/liquids, doing an ice water mouth rinse (shown to be very effective for disease populations, such as multiple sclerosis), wearing moisture-wicking clothing and using appropriate ventilation to lower environmental temperatures.

When to See a Doctor

Because yawning is a reflex, there usually isn't any reason to try to stop it from happening. But if you're experiencing excessive yawning during a workout, it might indicate something more serious.

If you're yawning excessively during moderate to vigorous activity, that yawning can lead to lightheadedness or dizziness. It could mean very low blood pressure or a hyperactive vagus nerve.

Low blood pressure is associated with a host of underlying medical conditions, according to the American Heart Association.  Some of those include pregnancy, bed rest, medications, allergic reactions and problems with hormone-producing glands.

A hyperactive vagus nerve can be caused by extreme stress. The nerve works overtime to decrease heart rate and blood pressure, but in some cases, it brings down blood pressure too much, causing severe low blood pressure, according to an article from Society for Science and The Public.

If you're yawning during exercise but not experiencing any negative side effects, don't worry too much. But if you're dizzy or lightheaded, that warrants a conversation with your doctor.

Posted by Fitness with a View at 5:44 AM